Moving from AppVeyor to GitHub Actions

It’s been over three and a half years since I first created my blog with Hugo and AppVeyor. Since then, I’ve been fortunate (or unfortunate depending on the tool!) to use lots of other CI/CD tools such as GitLab CI, Jenkins, Bamboo, Azure DevOps. GitHub Actions is one tool that I hadn’t used yet and it’s been on my radar for a while so why not take the opportunity to update the blog and the CI pipeline?

One of the main wins for me with GitHub Actions is the integration with GitHub. Having your code and your CI pipeline in one familiar GUI makes for a really nice experience. There’s also a great VSCode plugin I found called cschleiden.vscode-github-actions which provides a really nice view of all your pipeline builds (or workflows as they’re called in GitHub) like this: 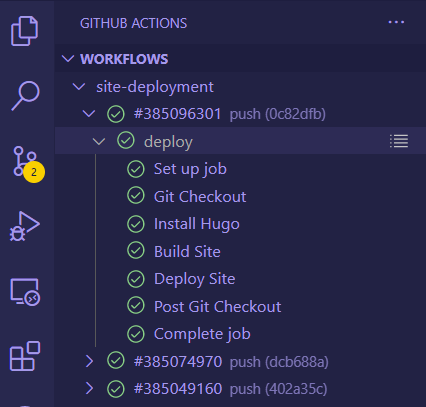 Another great benefit of GitHub Actions is the marketplace that contains thousands of actions that can help automate your workflow.

The first thing I was going to do before I got started with GitHub Actions was to move my old inline code from the AppVeyor build file and into its own script. Over the years, I’ve realised that pipelines can get wildly out of hand if you don’t abstract as much code away from the pipeline syntax as possible. This makes your pipelines way easier to read and understand and allows for them to be easily portable into other CI tools if required.

After some initial testing with the Windows 2019 runner, I decided to swap over to Linux as the builds went from around 30s in AppVeyor to a whole 3m30 in GitHub Actions.

Before I started to refactor my code into a little bash script, I thought I’d have a quick look at what community Actions were available to potentially simplify my workflow and lo and behold, it couldn’t have been simpler.

There’s a Hugo Action available from here which installs Hugo at the version you specify. On top of that, there’s a GitHub Pages Action which allows you to deploy your static content to your gh-pages branch or whichever branch your GitHub Pages is setup to point to.

This therefore meant that I didn’t actually need to use any scripts or any custom code at all and my workflow YAML file is wonderfully simple. My code is almost exactly the same as one of the examples in the Hugo Actions repo - everything just worked - what a joy it is to say that after the ‘fun’ I’ve had debugging pipelines in certain CI tools in the past.

Here’s my complete workflow to change my blog to use GitHub Actions:

Here is the full workflow file with some annotations for each section:

As you can see from the above, this is a super simple way to get your site built and deployed on a commit. The build time for this is now ~30s which is comparable to AppVeyor but having no custom code makes it look much cleaner. I’m looking forward to getting into the weeds with GH Actions on some more complicated projects but initial impressions are very good!